Berkeley West Thames has donated £10,000 to its designated charity, Hope for Southall Street Homeless (HSSH), to help deliver the charity’s important work in Southall. The cheque was handed over on 10 December at Berkeley’s newly named development, The Green Quarter.

The charity’s partnership with Berkeley has already enabled HSSH to recruit a full-time, complex-needs caseworker who supports individuals to reconnect with family, and provides access to health and employment services. As well as continuing to support this role, the new donation from Berkeley will go towards the charity’s vital Covid-response outreach work, which includes welfare checks on homeless people in the local community.

Susan Cawley from Hope for Southall Street Homeless said: “Significant donations, such as this, allow us to change lives in Southall. Being without a home is particularly hard in winter and we are really appreciative of each and every donation, especially considering how challenging the past year has been. With this support, we can continue our work helping homeless people in Southall strive towards a healthier, happier and more secure future.”

HSSH is running a winter clothing collection appeal this December and is asking for items such as sleeping bags, blankets and trainers as well as men’s warm jumpers and jackets. Donations will be accepted at St Anselm’s Church in accordance with social distancing guidelines from 11 am to 3 pm on 18 December and from midday to 5 pm on 20 December.

In addition to its partnership with HSSH, Berkeley is sponsoring Ealing Council’s Christmas lights display across the borough.

Ashley Kensington, Managing Director at Berkeley West Thames, said: “This has been a particularly challenging year for charities right across the country. We are therefore really pleased we can help Hope for Southall Street Homeless, a local charity that does such important work in the Southall community. The pandemic has highlighted just how crucial local communities are, and we would encourage everyone in the area to give what they can and support those in need.”

Berkeley’s plans for The Green Quarter are transforming a redundant industrial site into a place rich in flora and fauna. Once completed the 3,750-home development will have two new parks – including Central Gardens, the initial phase of which opens early next year – and wetlands, to be delivered in partnership with London Wildlife Trust. In addition, a series of footbridges will open up neighbouring 90-acre Minet Country Park, enabling easy access for the whole community.

Preview appointments are now available from the new Sales and Marketing Suite, prior to a public opening in January 2021. For more information, please call 020 4502 3995 or visit The Green Quarter website. 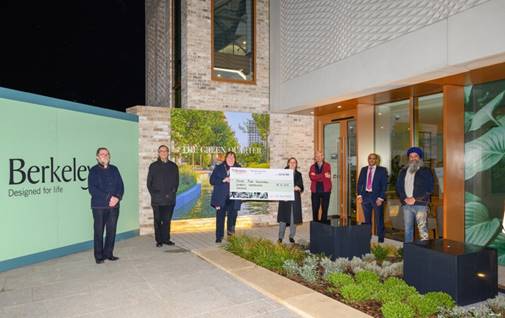