Fast-growing removals and storage firm Alexanders Group is operating a Christmas Foodbank collection from the residents of Twickenham on Monday 13th December.

Since April 2020 the company has collected over 200 tonnes and food and supplies from 30 roads in Twickenham every Monday morning and delivered to a variety of foodbanks across London depending on where demand has been greatest each week.

‘We have been delighted to support foodbanks throughout the pandemic’ commented the firm’s Director, Alexander Pope.

‘When we were unable to carry out removals due to Government Covid-19 guidelines we wanted to find a way to use our resources to help those most in need at such a critical time. The donations from the residents of Twickenham have been extraordinary week after week’

St Margaret’s resident Kay Mortimer said ‘Our street has come together to support this fantastic initiative over the last two years as have many other roads in the area. It has allowed us to donate food with ease and to offer some help to families at such a difficult time.’

The Vineyard Community runs crisis and social inclusion services across the borough helping individuals overcome personal crises and reconnect with society. The Richmond foodbank is part of the Vineyard Community Centre in central Richmond and operates three other foodbanks in the borough. It provides approximately 2,400 emergency food parcels each year to those who would otherwise go hungry. 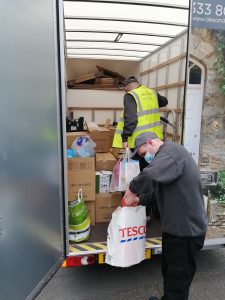 Alexanders is a member of the British Association of Removers, and runs both self-storage and container storage warehouses in north-west London. The company is the current ‘Domestic Mover of the Year’, the highest national accolade awarded within the removals industry.

The company has been nominated for five awards at the West London Business Awards 2022 including ‘Logistics Business of the Year’ and the ‘Community Investment Award’ with the ceremony taking place at Twickenham Stadium in February.