The Brunel Business School, Brunel Hive and the BBS Executive Talk series will host a public talk on Thursday 6 February (6pm) – ‘Dame Stephanie Shirley: Transforming the business world one step at a time’, which will feature insights from Dame Stephanie Shirley, workplace revolutionary and successful IT entrepreneur turned ardent philanthropist. 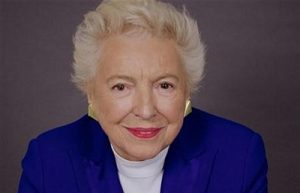 Dame Stephanie Shirley’s life story begins with her 1939 arrival in Britain as an unaccompanied Kindertransport refugee. In 1962, she started a software house – Freelance Programmers – that pioneered new work practices and changed the position of professional women, especially in hi-tech. She went on to create a global business and a personal fortune shared with her colleagues; she made 70 of her staff millionaires at no cost to anyone but herself.

Since retiring in 1993, her focus has been increasingly on philanthropy based on her strong belief in giving back to society. In 2009/10 she served as the UK’s first ever national Ambassador for Philanthropy. Her charitable Shirley Foundation has initiated and funded a number of projects that are pioneering by nature and strategic in impact, totalling £67m to date, with a focus on IT and her late son’s autism.

Her memoir “Let IT Go” was published in 2012 . It has sold 20,000 copies and was re-published by Penguin in April 2019, with a view to distributing it worldwide. A big screen film is also in the making and filming starts later this year.

REGISTER FOR THE TALK