On Friday 21 June, EcoWorld London marked its first anniversary with a celebration at Verdo-Kew Bridge, their latest project in Brentford featuring a musical performance by pupils from Green Dragon Primary School. 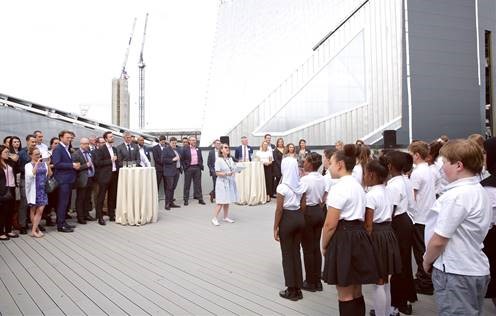 EcoWorld London has engaged with Green Dragon Primary School on numerous occasions previously, such as collaborating with the school to design and plant the flowerbeds at their onsite offices. The developer has worked closely with the local community and executed a number of activities making use of the live construction site and new marketing suite at the development, most recently inviting students from Isleworth and Syon Secondary School for Boys to a careers in construction event.

EcoWorld London officially launched in the UK in June 2018 as joint-venture between EcoWorld International and the Wilmott Dixon Group. EcoWorld International has plans to deliver more than 10,000 in the next few years through its joint-venture projects with Ballymore and via EcoWorld London, including over 900 new homes for sale and rent in Brentford as part of their Verdo Kew-Bridge development.

Landmark achievements for the company in the past year include a deal with Invesco Real Estate to deliver 1,100 Build-to-Rent homes and securing a £94 million funding facility to deliver a new 17,250-seater community stadium for Brentford FC and the wider Verdo-Kew Bridge development. These significant financial commitments signal EcoWorld London’s intent to be a market leader in the industry and specifically in Build-to-Rent, with an ambition to deliver 10,000 homes in the next five
years.

In June, Brentford FC announced that EcoWorld London will be Principal Partner for the 2019/20 season, featuring on the front of the new Sky Bet Championship side shirts in the club’s final season at Griffin Park. EcoWorld London are also joining forces with the award-winning Brentford FC Community Sports Trust with the aim of creating sustainable improvements in local facilities and
active opportunities for people in the London Borough of Hounslow and beyond.

In his welcome speech, Heng Leong Cheong, CEO of EcoWorld London said: “When EcoWorld London first launched, we had one simple goal: to become one of the biggest names in the UK property industry. One year on we have achieved remarkable progress, from securing a historical Build-to-Rent deal with Invesco, launching Verdo-Kew Bridge, substantial and impressive build progress on the stadium and the excellent work with our community engagement team.

Our strapline ‘Creating Tomorrow and Beyond’ does not just refer to the fact that we are building homes for the future. Our developments must leave a positive legacy for everyone who lives and spends time in and around them, providing much needed quality homes and working with communities to support the development of diverse and thriving hubs across London.

This is just the beginning of EcoWorld London’s story and I would like to thank all our partners and collaborators for supporting us on our journey so far and am very excited for what’s to come for us.”

The Verdo-Kew Bridge development is the latest of EcoWorld London’s projects in the capital and part of Brentford’s multi-million-pound regeneration. In addition to homes, the scheme incorporates the Brentford Community Stadium, a new purpose built location for Brentford FC Community Sports Trust and a public square with shops, cafes and restaurants all located next to Kew Bridge Rail Station and at the heart of one of London’s most exciting new destinations.

Ivy House was the first phase of Verdo-Kew Bridge to be released to the market, offering 96 homes which includes one, two and three bedroom apartments. Jasmine House, the latest phase of the
Verdo-Kew Bridge development, will be launched later this summer providing 84 more homes which represent the very best of London living in the well-connected and burgeoning Brentford.