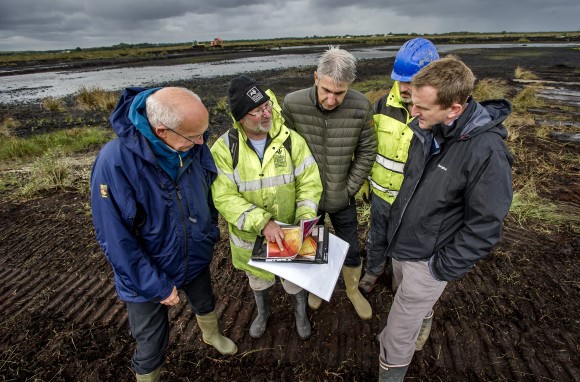 • Lancashire nature reserve is first peatland restoration chosen by Heathrow as carbon offsetting project
• Heathrow plans for the airport to be carbon neutral by 2020, and eventually for its infrastructure to be zero carbon by 2050
• Heathrow research into peatland restoration could help UK aviation industry fulfil its international carbon commitments
• Terminal 2 becomes one of the world’s first terminals run entirely on renewable energy

Heathrow has announced its investment in an unique project in UK aviation: the restoration of UK peatlands to offset carbon emissions. Working with the Lancashire Wildlife Trust and DEFRA, Heathrow’s first restoration priority will be Little Woolden Moss, part of Chat Moss which is a larger area of peat bog land, west of Manchester, it has been subject to commercial peat extraction for over 15 years.

The restoration of the UK’s peatland bogs, forms part of Heathrow’s plans to be a carbon neutral airport by 2020. By supporting research into the climate benefits of peatland restoration, Heathrow hopes to show that projects like this will make a good option for airlines’ CORSIA commitments – an international agreement to deliver carbon neutral growth in aviation from 2020. This pilot project will also help explore opportunities for peatland to deliver cost effective carbon offsetting alongside a range of other benefits including biodiversity, water quality, and flood protection.

Heathrow’s aim is to operate zero carbon airport infrastructure by 2050, meaning that the day to day operation of the airport infrastructure results in no emissions of greenhouse gases. As part of the progress made against these plans, Heathrow has also announced that Terminal 2 is now powered by entirely renewable means: 124 solar panels on its roof, an on-site biomass boiler using locally sourced forestry waste and renewable gas and electricity supplies. With all of Heathrow running on 100% renewable electricity since April 2017, Heathrow is already nearly 80% towards its zero carbon airport goal.

Heathrow has invested more than £94,000 in Little Woolden Moss to restore 70 hectares of peatland that has up until now been used for extraction. According to DEFRA indicators, the restoration of this project area could lead to savings of 22,427 tonnes of CO2 over 30 years – equivalent to nearly 64,000 passenger journeys from Heathrow to New York. Following this initial pilot project, Heathrow plans to invest in more peatland restoration projects over the next two years, and the airport is already exploring other locations.

Taking the lead in restoring peatlands as carbon sinks is a long-term project announced in Heathrow 2.0, the airport’s sustainability strategy. The UK has seen a catastrophic loss of peatland habitat until today – with 94% of the country’s natural peatland either destroyed or damaged. Peatlands still represent the UK’s biggest store of carbon, and studies have revealed that if all the UK’s bogs were in favourable conditions they would have the potential to remove and assimilate an additional 3 million tonnes of carbon a year.1

Heathrow has recently signed up to the global Science Based Targets Initiative, pledging that it will align its emissions targets with the goals of the Paris Agreement to limit global warming to well below 2 degrees. The airport has also achieved the Level 2 Carbon Trust Supply Chain Standard, one of only 11 companies to be accredited and the first airport. The standard recognises Heathrow’s work with its suppliers to target year-on-year reductions in supply chain carbon emissions

The restoration of Little Woolden Moss will take place over three years, and the restored site will continue to be publicly accessible for cycling, walks, and community events. The restoration will involve pumping water to the site, planting native plant species, and eventually allowing the area to fully restore its rich habitat and wildlife – including species like the common lizard, Black Darter Dragonfly, Brown Hare and the rare Bog Bush Cricket.

Heathrow Chief Executive John Holland-Kaye said:
“We are very excited to announce our partnership with the Lancashire Wildlife Trust, and explore how UK peatlands can be used as a carbon offsetting tool. Climate change is the greatest challenge our generation is facing and while this is just the first of many projects, we hope it will be a model for the aviation industry to follow.”

Anne Selby, Chief Executive of the Lancashire Wildlife Trust said:
“The Trust has been working for over 30 years to restore these globally important habitats and fight for their protection. This has been made possible by the support of our key funders, members and local businesses who have supported our work for many years. We are pleased that Heathrow are joining them in protecting the future of our UK peatlands. Our wildlife is under threat and now is the time for us all to stand together to protect the future of our natural world; we must all be part of the solution”

Besides tackling emissions from its own buildings and infrastructure and investing in offsetting, Heathrow encourages airlines to use cleaner aircraft through landing charges, and through the “Fly Quiet and Green” League table, a public ranking of the best and the worst airline environmental performers. Heathrow is addressing carbon emissions from vehicles by instituting an airside ultra-low emission zone and by supporting public transport options into the airport, including the trebling of rail capacity by 2040.