“Some mixed housing news for the Government which is being buffeted by Brexit negotiations. The delivery of new homes, including new-build housing, conversions, change of use, across England has edged up by 2%, reaching 222,190 in the year to March. The number of total net additions has climbed every year since 2012, with new housebuilding alone up 65% over the same period. The number of new homes built in 2017/18 was 6% higher than the previous year.

“However, net additions are still around 26% lower than the Government’s target 300,000 annual target. While more timely data capturing energy performance certificates (EPCs) granted to new homes suggest a continued pick-up in activity this year, separate housing starts data, which captures information on new homes being started on site, shows a moderation in activity, which could weigh on housing completions in 2020/21.

“There is also a headache for policymakers in London, with net additions in the capital falling by 20% over the year. Only 12 of the 33 boroughs in the capital reported a rise in the number of new homes provided in the year the March. The EPC data suggests there has been a pick-up in activity since March, but the overall data shows that current planning policies have put a dampener on development, at a time when the housing need in London is growing.” 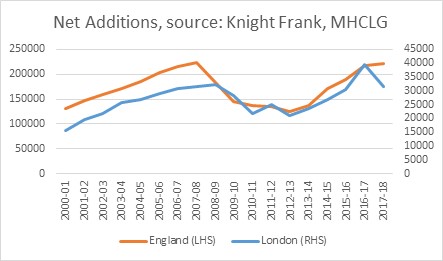 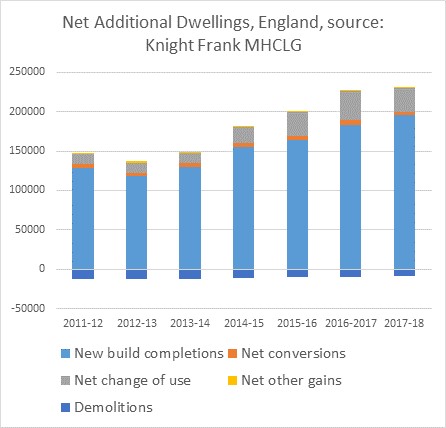